QUOBO and The Word Company 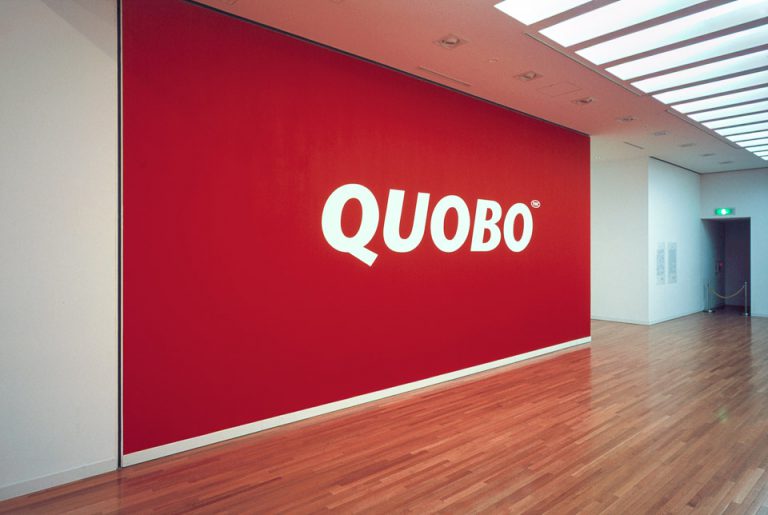 Harald Fricke: When was The Word Company founded?

Adib Fricke: The Word Company was started in 1994. I had originally proposed a completely different project for a gallery exhibition, but then suddenly realised that I didn’t really want to do it. I really wanted to bring words without meanings into the gallery, along with the contractual terms that regulate the trade in words—that seemed like enough to me. I changed the concept of the exhibit and showed the first four protonyms at the Galerie Anselm Dreher in Berlin.

A.F.: Words are the point for me. Earlier on, I was more interested in language. But I was even still using the notion of an image, for example in the form of “text pictures” . On the other hand, I had developed random generators that mixed pieces of text and could thus take the content-forming process to absurd lengths. My decisive break away from the text to the word came with The Word Company. Although some forms of dealing with “commercialised language” were already there in 1988, for instance in the AdibProp piece, a small book with 30 advertisements for The Adib Fricke Fine Art Corporation. These used the language of marketing and dealt with rhetoric and pictorial quality.

H.F.: In The Word Company, the discussion centres more on the question: can words be recognised or perceived as products?

A.F.: Yes, that has always been an aspect of the work. But when I started with The Word Company, it was only peripherally in awareness. At first the whole process, the entire work, led to disturbances, which I take to be a fruitful element in artistic praxis. To have an irritating effect on the existing communication infrastructure is a welcome part of the work for me. Today, words are more readily recognisable as products. This has to do with developments in art as well as in marketing, since more agencies just for naming are opening up and there’s a public discussion going on about trademarks, trademark law, and branding. There’s even the complaint that soon there might not be enough fresh, protectable neologisms available to label goods or services.

H.F.: The problem still remains: while the word said something about the state of communication in the conceptual art of Art & Language, for you the word stays completely separated from its function as a carrier of any kind of communication.

A.F.: By making the word into a topic of conversation, I create a social situation apart from the word as word. That discussion, along with TWC’s general terms and conditions of business, generates a completely unique discourse about the function and use of words in art and about what they represent.

H.F.: The areas they’re applied are also critical: you connect words with slogans, or you insert words strategically, as for instance when an exhibition in Leipzig was announced all over the city with ONTOM.

A.F.: There are works where I conceived slogans specifically in order to focus on these words as commodities, to put the words at the centre, such as those made for an art fair situation in 1997 with Galerie Barbara Weiss in Berlin. Apart from that, I make units consisting of words, pieces of sentences or whole sentences which, although they make some use of the rhetoric of slogans, aren’t slogans in the end, because they abandon the viewer, without standing for any product or object. I see ONTOM as a word that was temporarily linked with a product.

H.F.: That makes the art exhibited under this name identifiable?

A.F.: Yes, in the sense of ONTOM or of QUOBO for the ifa exhibition—there the work is more of a trademark. But the individual protonym is not automatically a slogan. And it’s only in a limited sense that my words function as trademarks. Despite the dynamic they have in such a situation, they aren’t selling a product.

H.F.: But exhibition titles are always conveying a stance, an attitude—➚ Sensation, Emotion. Aren’t these labels that already contain in their title what they’re supposed to convey visually?

A.F.: The name of the product offers an image, a promise, that is then kept—or not. My process is completely different: the words precede the possibly connected products. A certain expectation is aroused by the title Sensation. When I provide ONTOM for something, this word doesn’t really mean anything at first. In my research that accompanies the words in their formation process, I look for a word that has a good sound and a good form and has an effect like a word, but one that evokes few associations or better none at all.

H.F.: Aren’t invented words tremendously attractive for advertising, where the number of products has long far exceeded the number of words used to describe them?

A.F.: For a moment, at least, the words from The Word Company can hold their own as products, but they transport no product—at most they convey non-sense. A word that promises nothing in relation to the goods and services it’s supposed to stand for hasn’t got a chance in marketing, from my point of view. The essential thing about a brand name is the image it creates. But there can be similarities between the non-promise of my protonyms and the promise of a brand. AVANZ, for example, is from 1994 when The Word Company started, and since 1999 there is a brand of electricity named :avanza. I assume that people had associations when they gave the name to the product that they wanted to describe. Electricity that is speedy, perhaps also light; :avanza reflects this promise for RWE. The business also advertises using the slogan “... with electricity the source is what matters, and a good name”. If the term had existed then, I would have avoided it right away. Conversely, it always depends on observers and their associations. Only afterwards do you perhaps hit the bull’s eye of meaninglessness.

H.F.: These bull’s eyes of meaninglessness have something in them of the poet’s search for a fresh language. But doesn’t The Word Company consider itself more as a component of mass culture and the media world?

A.F.: I’m interested in formulating an ideal that can hardly be fulfilled. The thinking around mass culture has to do with the bold, pithy presentation of the words. My work comes from the standpoint of visual design. I find it boring to read words set in nine-point serif type in running text on the page of a book. When words are materialised, I find it more interesting to get at them via colour, via the design or the spatial quality of surface. These are techniques of attention. It’s making the work visible. In the beginning, the presentation was greatly reduced: five-centimetre-high vinyl letters on the wall, along with two DIN A4 sheets of paper with certificate and general terms, and a completely empty room. Stamp prints in magazines, lottery tickets on which the words could be found ... I tried out various forms. I started using areas of colour around the words in the colour flyers that I had made for a project at the Galleri Wang in Oslo in 1996. Since 1997, I’ve been doing this in wall-sized format. What’s important in all these renderings, however, is that the words always have enough space to be in. When The Word Company started, I decided on a certain typographical image that I’ve retained ever since. By doing this, a corporate design has developed over time, which reinforces the previous steps each time it gets used. That’s the usual procedure in contemporary marketing, by the way.

H.F.: Then the words stand for the self-referential nature of the art business?

A.F.: No, they stand for The Word Company. And to get to The Word Company, you need words. At the same time, the work is strongest where the possibilities that can be connected with these words become apparent.

H.F.: How important is reproduction to this process?

A.F.: It’s essential, because I’m concerned with distribution in the works, with bringing the words into circulation. Ideally, the words should be reproduced as often as possible in a variety of different distribution channels. The keyword is the idea of process; that’s how I operate with The Word Company. The individual word is there for a moment and then becomes more or less interesting. But as a whole, questions come up like: to whom do words belong? What’s involved in copyright? How is creative work protected? What constitutes non-sense? What happens during the process of use? Is a word only a word, just that and nothing more? And so on and so on. That’s where The Word Company goes public, unlike labels, for instance, or product marketers.

A.F.: The words still continue to function within language. Only there can they come to use. They also reach the possible state of not being a word only because there is language. They’re still shells, though, within the language, they don’t yet have a conceptual application. They’re available but only half finished in this sense. The protonyms are open and allow for any kind of connection, and also for no connection.