“I love words and work with them” 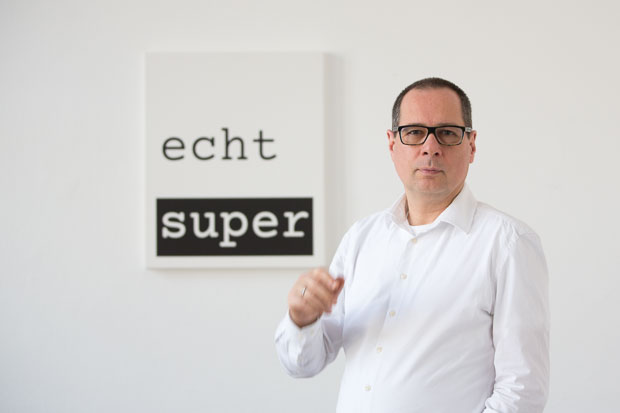 Words, for Adib Fricke, are the raw material of his work. The conceptual artist has been involved since the late 1980s with the meaning, use, and perception of word and text.

From the early experimental text works and random generators that create sentences, to the production and distribution of words that don’t yet exist, to the site-specific installations with fragments from digital text collections—Fricke puts the plasticity of language to the test, makes it visible, plays with its materiality and impact. In recent years he has been conducting a parallel exploration of neuroscientific questions about art and creativity in the context of his ➚ Bedeutungslabor.

What mental processes are triggered in the viewers by the visual presence of words and fragments of text? And what does linguistic irritation do to us? Form, color, scale, and typography mediate the perception and interpretation of Fricke’s artistic interventions. Whether The Word Company, Wordspaces, or Superwords, Fricke works in series. His projects often enter into a dialogue with the spatial situation; language itself becomes the material for powerful and at the same time poetic messages.

Adib Fricke’s work has been exhibited nationally and internationally, and is represented in numerous collections. Fricke, born in 1962 in Frankfurt am Main, studied visual communication at the Berlin University of the Arts (1981–88) and Japanology at the Freie Universität Berlin (1986–87). He lives and works in Berlin.