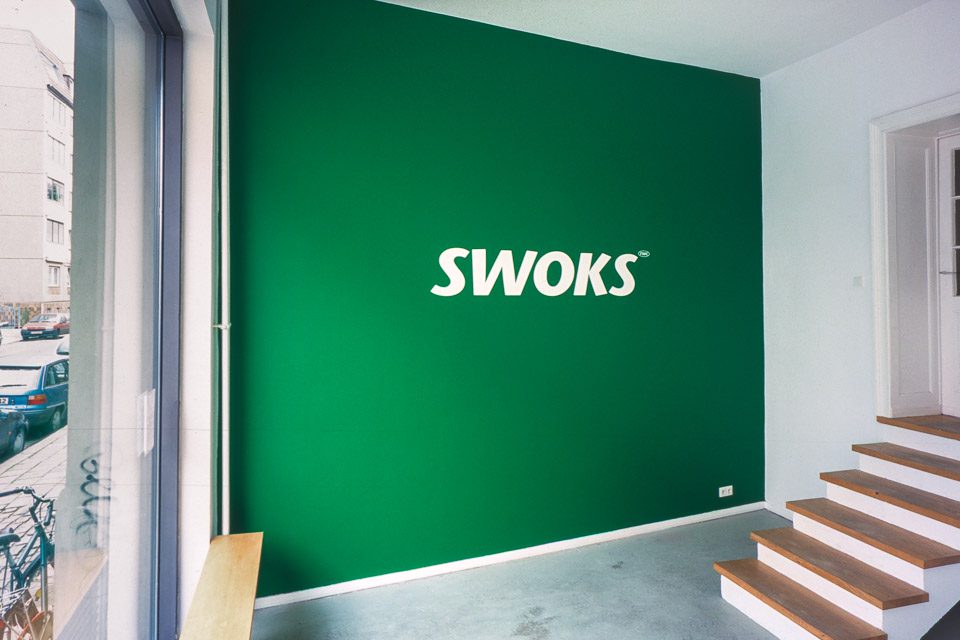 Contribution to “1st Public White Cube” by Gerrit Gohlke, and Blank & Jeron.
A mural with SWOKS accompanied by a table and two chairs were the starting situation for the exhibition project. During four weeks the audience could bid via the internet based auction platform eBay for the right to alter the show. Each of the winners of the six auctions was allowed to change the exhibition situation.
“1st Public White Cube (PWC)—Working with the public’s involvement”, Projektraum Galerie Matthias Kampl, Berlin 2001
Acrylic paint, table and two chairs
Details

On September 28, an unusual series of auctions will begin with the opening of the exhibition »SWOKS« by Adib Fricke in the 1st Public White Cube. What’s up for bid here aren’t the customary art objects, but rather the right to alter them. The public can bid on the right to irreversibly change the exhibited art—according to its own taste and its own ideas. Certain rules prevent the removal of walls or the endangerment of the public. Apart from this, however, absolutely no limitation is being imposed. The viewer can demand and realize whatever he or she desires. The only precondition is that the viewer overbid the competition and pay for his or her manipulation. It’s not the taste of the organizers that will decide the form of the art, but rather the way the auctioning business proceeds.

Up to six internet auctions per exhibition.

The sequence of changes is planned as an ongoing process. Up to six auctions will take place during each of the four week-long exhibitions. Three artists have consented to take part in the process, during which the exhibited work could change extensively. Thus, up to 18 auctions will be taking place, a number, however, which is contingent on the existing demand and will remain mutable. The internet will serve as the auction location; in using the auction platform Ebay®, an extremely successful auction marketplace will be made available for anyone to use free of risk. This process not only allows us to keep the starting bid of the auctions low—the minimum bid for each change is a mere DEM 20.00 (10.23 EUR)—but also to conduct the auctions publicly. Any computer with access to the internet can provide a look at our documentation website http://wwwprojektraum.org and enable a participation in the auctions. A simple registration procedure and the placement of a bid on the Ebay® site suffice.

While the auctions are taking place in the internet (visitors without access to the internet can also place their bids during opening times and by appointment in the Project Room in Auguststrasse 35), the interventions purchased by the public in the auctions will be taking place in the gallery, which will continue to change at every stage, thus becoming a counter-image to the interaction on the screen: the interaction carries consequences. What if exhibited art would be dealt with interactively in a real sense, we asked ourselves—and when would an »interactive« installation have consequences?

The Berlin artist Adib Fricke will open the exhibition series by presenting a word piece in the form of a room installation. Fricke, who often works in the public arena and has realized numerous new word creations (protonyms) there over the past few years, regularly contrasts appearance with meaning, public intervention with a minimum offer of signs, artistic autonomy with professional marketing in his work. Fricke’s »The Word Company« appears in the internet as a middle-class wholesale supplier. What’s being supplied here, however, are not objects of trade, but words that have been professionally visualized, referring to nothing but themselves. Thus, art is not only being questioned using the mechanisms of trademark production; in an ironic way, it documents its role in the public sphere—an ideal beginning situation for the 1st Public White Cube. Here, Adib Fricke will be presenting the protonym »SWOKS,« installed from wall to wall in front of a minimal amount of furniture.

The public will have the choice as to how it wishes to deal with this offer. Will it carefully take up the concept or articulate itself through destruction? Will it seek cooperation or conflict? The 1st Public White Cube is taking every risk, even that of standstill and banality. The market decides elsewhere in the art system, as well; here, though, the consumer has a more direct influence on the art objects. He or she has the right to deform them. Thus, the 1st Public White Cube is concerned with reacting to a development during the course of which the larger museum exhibitions have become increasingly public-oriented. As dependent on viewer quotas as the entertainment media, they have often melted difficult or uncomfortable art into colorful collages, and the artistic concept has often disappeared behind them. One could ask parodically: does the public deform in a different way than the curators do? And does the copyright remain despite the manipulation? The 1st Public White Cube is an experiment with an uncertain result. It is also a plea to take a risk—and a chance for collectors: in the last auction, shortly before the exhibition closes, Fricke’s space will be up for sale complete with all the manipulations that have been carried out—for an increased minimum bid.